After a brief hiatus I shall soon be up in the air again and since I’ll be flying internationally I will need a current passport to do so. A passport is one of the most amazing things you’ll ever own. With a passport you can go almost anywhere in the world. More importantly, it allows you to come back home, to the United States. Do you have a passport? It’s like a magic key that unlocks the borders of hundreds of wonderful countries. It’s like having a season ticket to all of the world’s biggest events. Your favorite music star is giving a concert in London? You can go, mate. Want to ski in Canada? No problem, eh? Are you in the mood for a little Fettuccine Alfredo in Rome? Ciao, bella. If you have children, I believe that it’s one of the greatest gifts that you can give to them. A passport offers an open invitation to the world, to learning and enjoying new experiences and opportunities and hey, while we’re at it – a shot at world peace. Nothing knocks down the barriers of prejudice like meeting the people of a different country. Quite frankly, at $130.00 plus the cost of your photo, it’s one heck of a bargain. For literally only $13.00 a year, you can go almost anywhere you want to go. You now need a passport any time that you’re crossing a U.S. border, even to our adjacent neighbors, Mexico and Canada. However, the rules do allow for an enhanced Driver’s License if you live in New York are driving to Canada. Many years ago you were able to fly to the Caribbean with just a Birth Certificate and picture identification such as a Driver’s License, but today you need a passport. It appears, however, that fewer than 46 percent of Americans hold passports. I’m proud that New York State tops that rate at 57% bested only by New Jersey where 62% of their population has the ability to cross our borders at will. If I have convinced you to think about getting a passport allow me to offer some advice.

Plan ahead. It can take time to receive your new or renewed passport. I usually advise that you submit your application a minimum of 6-8 weeks before your departure date. Earlier is even better. Trust me when I say it will reduce your stress level when you’re facing a rapidly approaching departure date

Get a good photo. This suggestion is really important and you should start by choosing your photographer wisely. That photo is going to be with you a long time. 10 years to be exact, staring back at you and being reviewed by officials who decide whether or not you get to enter their country. You might want to look like someone they would want to welcome across their border. You will also need to adhere to the following partial list of current parameters as shown on the travel.state.gov website but I do suggest that you visit the site for full details.

Your photo must be:

Taken within the last 6 months to reflect your current appearance

Taken in front of a plain white or off-white background

With a neutral facial expression and both eyes open and taken in clothing that you normally wear on a daily basis:

Final Advice. The third but most important piece of advice I can offer is simple but oh so important to keeping your dream of eternal youth alive. Under no circumstances should you compare your previous photo to the current one. Trust me, you’ll probably be setting yourself up for disappointment – or a reality check. There’s absolutely no denying the passage of time when comparing 2 usually less than flattering photos that were taken 10 years apart, side by side. Worse, I’m not sure what I was thinking when I actually pulled out the passport from 20 years back. That was just asking for trouble. “Yikes” was the only word that came to mind as I looked at a much younger version of myself compared to what I currently see in the morning mirror. Fortunately, I was distracted by reviewing the exit and entry stamps and spent some time reminiscing about those previous excursions. For my most recent photos I chose to utilize the services of On Location Studios. My line of thinking was that the professionals would surely be able to erase the ravages of passing time that have marched across my face.  I begged photographer Al Nowak to let me lay down on the floor for the picture taking. My goal was to take advantage of gravity to smooth out my skin and help deny that which I choose to ignore in the mirror. Mr. Nowak mumbled something about being a professional but I got the last word by sneaking in a fairly neutral Mona Lisa-like smirk. In hindsight, maybe it’s not a bad thing to recognize that time is moving faster than you realize. Maybe it will help you to decide to finally make the plans that will take you to wherever it is you dream of visiting. Go ahead, get that passport. I’ll be happy to help you use it.

Keepsakes, tchotchkes or souvenirs. Whatever you prefer to call them they all basically serve the same purpose. Each item, selected and transported back home, by a travelling friend or relative is intended to serve as a “thinking of you” gift. It’s true that some gifts also serve as a bragging tool which gave launch to a particular type of souvenir that you might be familiar with, or worse, guilty of giving as a gift. It’s the “My parents went to (fill-in-the-blank) and all I got was this lousy mug, stupid t-shirt,” etc. I’m sure that there’s more humor than insult involved in those types of items but I believe that the humor wears off rather quickly and actually becomes a bit of an embarrassment. No doubt, the item is eventually relegated to a dusty shelf or in a box destined for a yard sale. Sometimes a gift really hits the mark and each item I receive is less about the origin but more of a reminder of the person who gave it to me. I suppose that’s the point. I find that these mementos generally fall into one of three categories.

The Familiar Icon souvenir. These items are often humorous and can be an exaggeration of a stereotype associated with a particular location. Scandinavian folklore tells tales about a mythical creature known as a Troll. Trolls are not usually noted for their cuteness, apparently come in all sizes and tend to be rock dwellers. They don’t sound appealing, yet the Scandinavian Tourist Council has chosen their version of a happy Troll to serve as their mascot and marketed it into a major revenue producer for the country. It’s a hit with tourists and I was lucky to receive an adorable and friendly looking stuffed Troll straight from Norway. Hopefully, that was more representative of the local lore than the giver’s assessment of my personality. I have also been lucky enough to receive a gift of beautiful lace from Ireland, a small stuffed koala bear from Australia
and a bold colored painting from the Dominican Republic.

The Fun category. Fun people like to do fun things and their gifts usually reflect their sense of humor and joyful view of the world. One such couple, departing from New Orleans for a cruise, had the good fortune to schedule their vacation during Mardi Gras. It was like getting two vacations for the price of one! They spent two nights in bawdy N’awlins and then seven nights aboard a cruise bound for the Caribbean. Several days later, while they were still sailing, I received a package. It was literally Mardi Gras in a box complete with purple, green and yellow beads, a paper King’s crown, confetti, and the best part was the mini King’s Cake with the traditional toy surprise inside. Some people just know how to give gifts! Fast forward two years and the same couple cruises the Hawaiian Islands. If you’re thinking that they sent me a case of pineapple you’d be wrong. Remember, I said they were fun people. Several days after they had returned, I received a coconut in the mail. A real coconut. It wasn’t shipped in a box, it was shipped au naturel with just a coat of hand painted tropical flowers, hand addressed to me. The best part was that the delivery guy didn’t even blink. Just another package, another day on the job. If that wasn’t one of the weirder things he’s ever delivered, I can’t begin to imagine what was.

The Local Food souvenir. If you’re looking for just a “taste” of a destination, how about an actual taste? We’re coffee drinkers in my office and have enjoyed many gifts of beans from revered growing areas such as Costa Rica, Kona Hawaii, or the Blue Mountains of Jamaica. If you smell a theme here it’s merely the aroma of freshly ground coffee that has spent days, not weeks or months, waiting to be brewed. Of course the scent could also be from  fresh spices from Grenada in the Caribbean, an island well known for their bounty of spices or the luscious chocolate from travelers returning from Switzerland. I’ve also been given a colorful painting from the Dominican Republic because the giver knew how much I liked the bold colors of the Dominican/Haitian style. Then there are the more personal gifts. The kind of gift that touches your soul and proves that you’ve made a deeper connection. I was arranging a  cruise for long time clients who were branching out from their regular mode of travel. They would be visiting Istanbul, Turkey, a city that I had spoken of, often and very fondly. I hoped that they would enjoy the city as much as I did. It was a big hit and one of the more enjoyable ports on their itinerary. Upon her return she stopped in to see me and tell me that she too, enjoyed the city. Her gift to me was not only unusual but it was one of a kind, just for me. The photograph image of the Blue Mosque, taken by and framed for me was thoughtful, spot on and has a privileged position on my desk. Similarly, when you think of the Netherlands you probably immediately think of tulips. When I think of tulips I think of one particular young man. He was straight out of high school and his mother wanted him to have an adventure before committing fully to adulthood. It was decided that he would journey to Tanzania, Africa, and climb Mt. Kilimanjaro. With safety in mind we chose an adventure group that welcomed all ages and all levels of experience. As I arranged his air itinerary it became apparent that for ease he should transfer through Amsterdam, Netherlands before continuing to Africa. Similarly, on the return trip, he would also need to change planes through Amsterdam and I suggested that he take a day to see the city. He and his mother agreed, I made the changes to his itinerary and added a hotel. I took care to warn him about the local nightlife but encouraged him to explore the city. Several weeks later, he returned from his expedition and stopped in to see me. We talked for quite a while and I enjoyed hearing about his varied experiences. Somehow, he seemed changed, accomplished, maybe even more mature. As he rose to leave he handed me a gift. I unwrapped a painted wooden tulip direct from Holland. With a smile and a hug, he left my office and I had the feeling that he was ready to move on to bigger and better things. 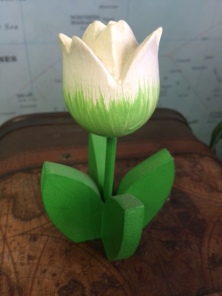